Interesting Facts > Lavender Bloom: A rare plant and a recent addition to the Indian flora at MSSBG!

Lavender Bloom: A rare plant and a recent addition to the Indian flora at MSSBG! 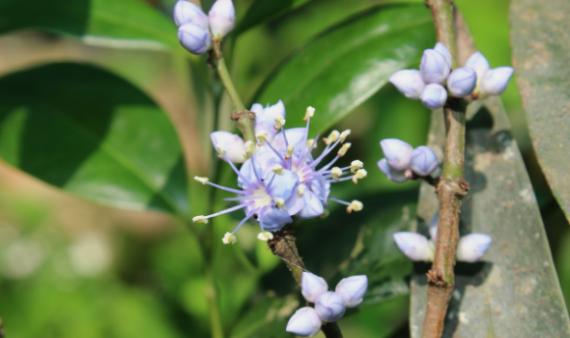 Memecylon clarkeanum Cogn. was first reported by Thwaites G.H.K in 1858 from Sri Lanka. It had thought to be narrowly distributed merely in Sri Lanka but in 2012 it was collected from the evergreen forests of Wayanad-Silent Valley region. A team of researchers of M S Swaminathan Research Foundation and Jawaharlal Nehru Tropical Botanical Garden (Thiruvanathapuram) has collected the Memecylon plant and identified as M. clarkeanum on thorough examinations. It is a new addition to the flowering plants of India. It’s found as a large shrub in the understory of evergreen forest between 500-900 m ASL. The key characters of the species are elliptic to lanceolate leaf lamina, midrib with indistinct inter marginal and lateral veins, pedicels absent or shorter than the receptacle, pale blue flower and globose fruit. Flowering and fruiting occur during November to March. The distribution of this plant is restricted to a few locations of Silent Valley-Brahmagiri region of Western Ghats and the population is declining in its natural habitat. This plant is categorized as Vulnerable in IUCN red list (https://www.iucnredlist.org/species/33517/9789376). This plant is conserved at MSSBG with other Memecylon spp., and the plant bloomed for the first time at the conservatory outside its natural habitat.