Interesting Facts > ‘Jack of all Trees’

‘Jack of all Trees’

Artocarpus hirsutus Lam., Wild Jack or Jungle Jack is a tropical evergreen tree endemic to Western Ghats- South, Central and Maharashtra Sahyadris. It is commonly known as ‘Anjili’ in Malayalam. It’s known as ‘Ayini’ or ‘Ayiniplavu’ in Kerala and its edible delicious fruit is ‘Ayanichakka’. The orange colored pulpy and juicy small fruits can be found while peeling the thorny outer layer of the ripened fruit. Its seeds are white in color and edible and called as ‘Ayanikkuru’ or ‘Anjilikkuru’, which is roasted and consumed by native people. The Artocarpus hirsutus grows in an altitudes ranging from sea level to an elevation of 1000 m in places with an annual rainfall of 1500 mm or more. This tree can grow up to a height of 35m with bark of 10-15 mm thick. Soil moisture is very essential for the growth of this tree. It’s flowering and fruiting time is between January to March and the fruits ripen during May and June. The tree belongs to the Moraceae family with dark grey bark when young later turn into scaly or flaky and blaze cream. Young branchlets are terete, tawny hirsute with annular scars. It exudates white latex and leaves are simple, alternate, spiral, clustered at the end of twigs. Flowers are unisexual and the male flowers are axillary spikes, pendulous, and female flowers in axillary spikes, ovoid. Fruit and seed are syncarp (sorosis), subglobose or ellipsoid with long echinate processes, orange when ripened; seeds many, ovoid. 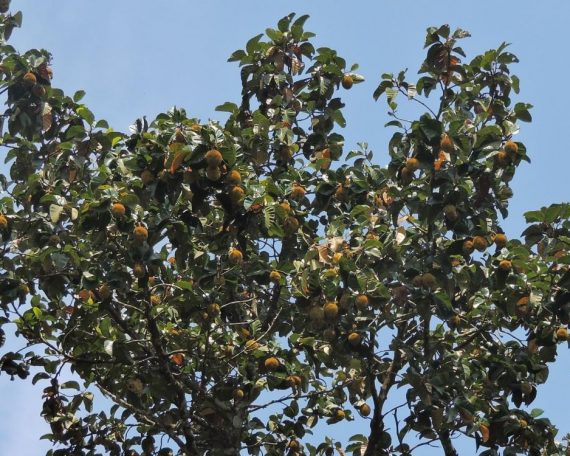 It has got high timber value; the quality is equivalent to teak with the advantage of lightness. It’s strong enough to build boat, ship and agriculture implements. It is highly preferred in the furniture industry, for ceilings and even for the traditional homes of Kerala, Nalukettu. The famous snake boats of Kerala are often built out of the Ayini wood. The leaves are used as green manure and tribes use the latex of this tree as an adhesive while making the arrows (to fix the quill) (Peoples Biodiversity Register, Pozhuthana Panchayat pp.92). The male inflorescence of the Artocarpus has been as a mosquito repellent conventionally. The inflorescence is burned and its fumes act as a repellent.

The seeds and fruits are medicinally significant and it is widely used in traditional medicine. The seeds have 16 -17% oil, which is used as a remedy for asthma and skin ailments. It has been used against inflammation, malarial fever, diarrhoea, diabetes and tapeworm infection. Artocarpus species are rich in phenolic compounds including flavonoids, stilbenoids, arylbenzofurons and Jacalin, a lectin. The natural products of artocarpus has several useful bioactive compounds and has antibacterial, antitubercular, antiviral, antifungal, antiplatelet, antiarthritic and tyrosinase inhibitory properties [U. B Jagtap V., Bapat A., Artocarpus: A review of its traditional uses, phytochemistry and pharmacology, 2010, Journal of Ethnopharmacology, 129 (2)142-166]. 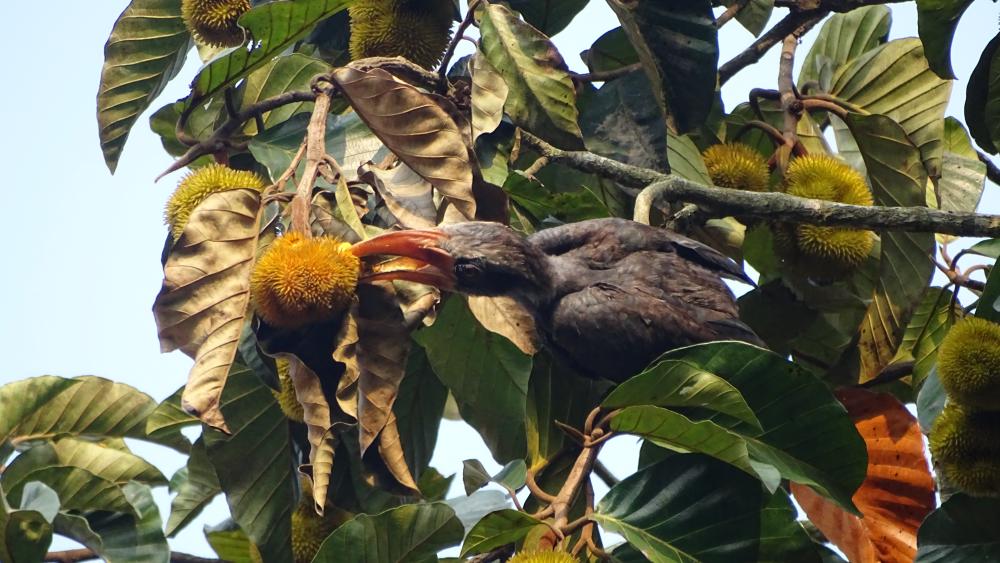 Though it’s a commonly available tree in Western Ghats, its significance has to be emphasized. The edible fruits of this wild tree have its high nutritional significance and rich in carbohydrate, protein, fat, fiber, calcium, phosphorous, iron and vitamins. The Malabar Grey Hornbills are frequently found in the garden since these are its main source of food during the summer. Malabar Giant squirrel and Nilgiri Langur found its home in the tree as well. The tree is common at M S Swaminathan Botanical garden with its fruits flourishing with orange color and the arboreal animals and birds found its nourishment in it.