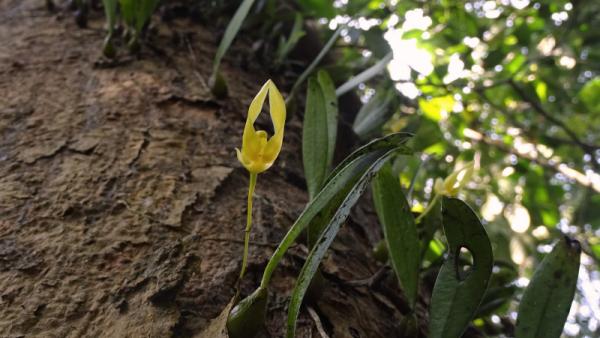 The genus Bulbophyllum is one of the largest genera in the orchid family and distributed throughout the tropical regions. The presence of the characteristic pseudo bulb provided the name to the genus. Bulbophyllum aureum is one of the endangered species in the group. Being endemic to south Western Ghats, it is grown as an epiphyte in the tree trunks of medium elevation forests. The species name aureum denotes its golden colour flower and it is commonly known as ‘Golden Bulbophyllum’. It was first described by J. D Hooker in 1890 based on the drawing made by T. C. Jerdon, an eminent zoologist. Jerdon collected this plant from Wayanad region of Madras presidency. The beautiful flower raised curiosity in both the naturalists. Hooker stated that he found nothing as beautiful as the little plant in his collections. The key characters of this species were its ovoid pseudo bulb tapering towards the apex and it is distantly placed on stout rhizomes, elliptic-oblong solitary leaves, golden flowers with elliptic dorsal sepals, oblong, lanceolate, acute lateral sepals and curved petal lip. It flowers during winter. The healthy collection of this endangered plant at MSSBG bloomed once again in the garden.